Though different in size and geography, the Malden River and the Mill Creek in southwest Ohio prove to be strikingly similar.  Both acted as hosts to riverside industry in the 1800s, were victims to the pervasive pollution that resulted, and became absent from public conscience.  Their use as a public amenity became obsolete.  With abandoned lots and overgrown land lining much of the banks of the Mill Creek today, the landscapes of the two rivers could be easily interchangeable.

Today, both rivers flow through multi-jurisdictional areas, with a considerable proportion of those areas considered “environmental justice” communities.  Specifically, the Mill Creek flows through 37 political jurisdictions, with some of the abutting neighborhoods having unemployment rates as high as 37.5% (Groundwork Cincinnati 2013).

In the 1800s, the Mill Creek, like the Malden River, served as a desirable location for large industrial complexes to operate.  With water mills generating power and the river serving as a dumping ground for industrial waste, the location was ideal.  Consequently, industrial waste, sewage, and even blood from slaughterhouses entered Mill Creek over the course of decades.

Ohio EPA quantified the pollution in the Mill Creek in 1992, when they conducted the first comprehensive chemical and biological survey of Mill Creek and some of its tributaries.  Bacteria and viruses exceeded standards at every site and sediment samples included heavy metals (lead, zinc, copper, cadmium), PCBs, etc. (Groundwork Cincinnati 2013).  In a study conducted by the U.S. Army Corps of Engineers on the Malden River, similar legacy pollution was detected.

The urban and former industrial landscape of both the Mill Creek and the Malden River has resulted in impervious surfaces comprising a large percent of the watersheds, leading to polluted stormwater runoff entering the water bodies.  Additionally, the old sewer infrastructure is incapable of handling large volumes of sewer and stormwater, resulting in combined sewer overflows (CSOs).  Mill Creek is particularly plagued by these events, gaining a reputation as being “an open sewer.”  One outfall in the Mill Creek, Lick Run Outfall, discharges about 1.7 billion gallons in CSOs per year (Rose 2012).

In the early1990s, amidst negative public perception of the Mill Creek, a group of local citizens took notice of the river’s potential.  In 1994, two years after the Ohio EPA had conducted their contaminant study, a citizens’ advocacy group formed in the name of the Mill Creek Restoration Project (MCRP).  Under the national nonprofit Groundwork USA, MCRP became Groundwork Cincinnati – Mill Creek and began spearheading initiatives to revitalize the Mill Creek waterfront.

Groundwork Cincinnati-Mill Creek launched creative fundraising campaigns to raise funds for implementation of the group’s initiatives.  Accessible and relatively easy to initiate, they used the internet as a platform and sought out ways in which people could donate to their cause.  Their online fundraising campaign included soliciting donations through Groupon Grassroots, the arm of the popular coupon website, Groupon that raises funds for nonprofit organizations.  Through Groupon, Groundwork Cincinnati – Mill Creek sought donations to fund water-monitoring equipment and transportation needed for a local teacher’s class to go on a field trip to Mill Creek.  Students would travel to a monitoring site to conduct water quality tests and learn of the river history and pollution prevention.  Other websites used for raising funds included an online shopping portal that gave a portion of its proceeds to Groundwork Cincinnati- Mill Creek, and a search engine that made a donation every time a search was conducted from the page.  Using online outreach proved successful in targeting a large audience.  Groupon, alone touts a network of 39.5 million customers (Groupon 2012).

In addition to the online campaign, the group also rigorously applied for grants.  The National Audubon Society and Toyota awarded a $50,000 TogetherGreen innovation grant to Groundwork Cincinnati- Mill Creek to engage inner city youth in learning about birds and their habitat, in restoring a three acre wetland, and in planting an edible forest garden along the river to provide food for birds, other wildlife and people.  TogetherGreen is a grant awarded by the National Audubon Society and Toyota that provides funding for projects that use innovative approaches and technologies to engage new and diverse audiences in conservation (National Audubon Society 2013).

One of the highlights of Mill Creek’s river restoration was the construction of Laughing Brook, a constructed wetland that features local environmental art, rain gardens, an educational kiosk, and native plants and rock layers that treat stormwater runoff.  Students and community volunteers helped to plan the garden.  Donors for the project were diverse and included the Ohio Arts Council, Ohio Environmental Education Fund, Cognis Oleochemicals, and the GE Foundation (The Herald 2008). 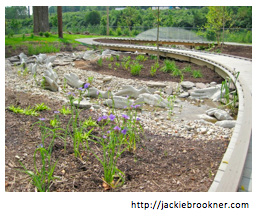 Groundwork Cincinnati has achieved significant progress in its own right, but had not acted alone.  Another organization, the Mill Creek Watershed Council of Communities (MCWCC) is an organization comprised of representatives from all 37 political jurisdictions that works to obtain grants, coordinate flood control projects, and oversee water quality management.  MCWCC also hosts public education events such as “lunch and learn” seminars held at the Mill Creek (MCWCC 2013).

Together, the groups have completed 15 ecological and engineering studies and completed 28 Greenway projects (Groundwork Cincinnati 2013).

From study of the citizen-led efforts on the Mill Creek, the Friends of the Malden River can certainly gain hope, direction, and strategy for encouraging citizen participation on the Malden River.